Even a few years back, when Wi-Fi wasn’t so popular, most users resorted to using Bluetooth as the best way to transfer files between devices. However, Bluetooth was too slow, and it would take a long time to send large files (files over 1 GB). For PCs, people used the USB cable to transfer files between their devices and PC. But, it was rather cumbersome, and connecting the USB cable constantly was a big problem. As Wi-Fi became popular, it gradually solved all these problems. It was wireless and was extremely fast. Besides, every Android smartphone nowadays supports Wi-Fi.

There are various applications in the Play Store which can help you to transfer files through Wi-Fi. Among them, the top applications have been chosen. These apps are very useful when you are sharing games data, HD Videos and films, lots of images or files at once, Music files etc. Transferring files over Wi-Fi give lot more flexibility and speed that old wired and Bluetooth methods. 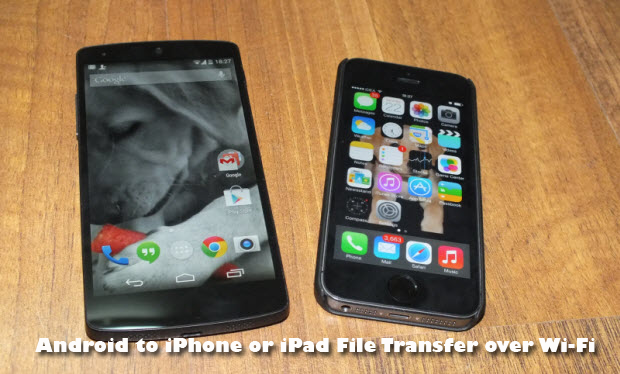 SuperBeam is a free Android application, and is considered one of the best file sharing apps available in the Play Store. This app is extremely versatile. Infact, one of the major advantages it offers over its competitors is that the receiver doesn’t necessarily need to have SuperBeam installed on their device. One just needs to have a phone which supports Wi-Fi and a browser installed in the phone. There is also an iOS app. Hence, it can send files of any size from your Android device to another Android smartphone, iPhone, PC or any modern Wi-Fi supported phone.

If both the devices have SuperBeam, then the receiver can simply scan the unique QR code generated, and the process will immediately start. You can get speeds up to 20 MBps, although that depends upon the devices involved. Besides, you don’t need to

There is a pro version as well, which can be bought for $1.99 from the Play Store. With this, you can remove ads, change the location where files will be received and features, use the SuperBeam app for PC and unlock several other features too.

Xender works in a similar way as SuperBeam does. Users can easily send and receive files via Wi-Fi without using any data plan through this free app.

The user interface is clean and well organized. You can also share any application that is installed on your device with ease. There are different categories like Apps, Gallery, Music, Photos etc. so that the user can find the required file to be shared easily.

It is also present in Apple store, do that you can use it transfer files to iPhone and iPad as well. If the Apple device installed, he or she can still receive files using the “connect iPhone” option. The instructions are clearly shown in the application.

How to Transfer Files from Android to MAC, Windows PC or Linux

AirDroid is not only a free Android application for sending files; it is much more than that. It can be considered as an Android manager, since this app literally helps you to manage your Android device through your PC via Wi-Fi. Your Android device and PC must be connected to the same Wi-Fi network though.

You can view notifications directly on your PC, install apps, play music, view images and send files back and forth with this app. You can also take screenshots, take images with the camera, and there is a “Find Phone” option as well. Infact, with the new update, you can now use WhatsApp and other messaging applications directly from your PC.

There is a PC application that you can download, but you can directly connect through your browser as well. You need to register with your email if you want to use all the features, but the lite mode can also work if you only want to transfer files.

Yes, I know what you guys are thinking. What is a file explorer doing here? Well ES file explorer is no ordinary file manager, you can use it to transfer files between PC and your Android device via Wi-Fi.

The process is rather straightforward, and once the setup is complete, moving files back and forth occurs almost instantly.

So you can not only transfer files, but also manage files on your device with the same app and that too for free!

How to transfer files from Android to Windows Phone

Feem is one of the best applications available in the market at the moment in order to transfer files from Android to Windows Phone. This app supports not only Android and Windows Phone but also Windows, MAC, Linux, iOS and Blackberry.

Design wise, it isn’t one of the best apps in this article. Especially, the logo of this application is a bit weird. However, its functionality does not have any connection with the design and the app works exactly the way it is supposed to. It requires the two devices to be connected to the same Wi-Fi network or hotspot.

There is a pro version as well, which removes ads. However, the free version also works fine.

So, these are the top apps which will help you to share files through Wi-Fi to iOS, Windows devices as well as Windows, MAC and Linux machines. SuperBeam and Feem are the most versatile among them. Also, ES file explorer is a special app, since its two-in-one app – a file manager and file sharing application. However, which one you choose totally depends upon you and how you intend to use it. You can also check our list of most selling Wi-Fi Routers and Hotspots.

how can I receive files on my iPhone from and Android phone using Wi-Fi share , how to send file from android to iphone , superbeam and ipad , slippedobi , rockhog , receive files from a smartphone via network , how to share files from android to ipad , How to send document from iPad to Android phone , how to receive apps and music from another gadget using xender on a windows phone , Wi-Next