Samsung has introduced their new big screen Android device. This is the advanced Dual sim version of famed Galaxy S named as Samsung Galaxy S Duos S7562. It is not the first ICS Android Phone with Dual sim but we have already reviewed Xperia Tipo Dual and Spice Mi425. It looks like it has almost all specs and features of Galaxy S with added Dual Sim functionality and ICS firmware. Galaxy S Duos features a 1Ghz Cortex A5 Processor on SnapDragon Chipset with Adreno 200 GPU. The Processor is capable of multitasking but I would prefer a dual processor dual Sim Android phone with big battery like Lenovo A660. You will get a big 4inch capacitive multi touch screen with 480X800 resolution.  Galaxy S Duos is also equipped with a 5 MOO camera and a front VGA camera for video calling. Check out the detailed features below: 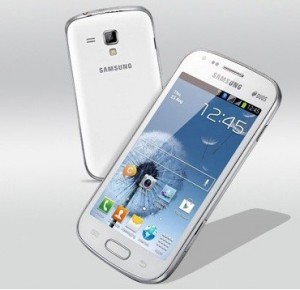 Yes, you are very much right the Phone represents Nexus S in term of Specs and Galaxy SIII in the design prospects. Nexus S has already got the Android 4.1 Jelly Bean update and there are chances that Samsung will provide Jelly Bean update officially for Galaxy S Duos. So this may be the first Jelly Bean Dual Sim Android Phone. Right now, there is nothing official about the firmware so we are still waiting for a formal announcement.

You can get almost same features at a lesser price with Spice Mi 425 or you can settle down to Sony Xperia Tipo Dual which is the first ICS Dual Sim Phone. When you look at the quality of craftsmenship on Galaxy S Duos then you will compare it with HTC Desire VC or HTC Desire V dual sim Phones. I feel that HTC Desire VC has got a great competitor but still Desire VC features a 1650mAh battery that definitely adds some points to HTC’s Side but still Galaxy S Duos is a clear winner with its price. If you looking for an Android Phone that has big screen, good camera, good music, Nice design and cool Android Ice Cream Sandwich then Galaxy S Duos is a definite consideration and it will give you Dual sim as an added advantage.

Galaxy S Duos is priced around Euro 250 or $320. At this price this is the best Dual Sim Phone available.