Android is a rising mobile OS platform, although iOS is keeping enough stones in its way but it has captured a big chunk in the market. There are many budget Android phones available in the market that get you a smartphone at best available price. Most of the people would like have  Dual sim Android phone as it gives access to 2 telecom network and that too, on a smartphone. We are here with 5 elegant Dual sim Android Phones that are featured and priced smartly. Check out the list below: 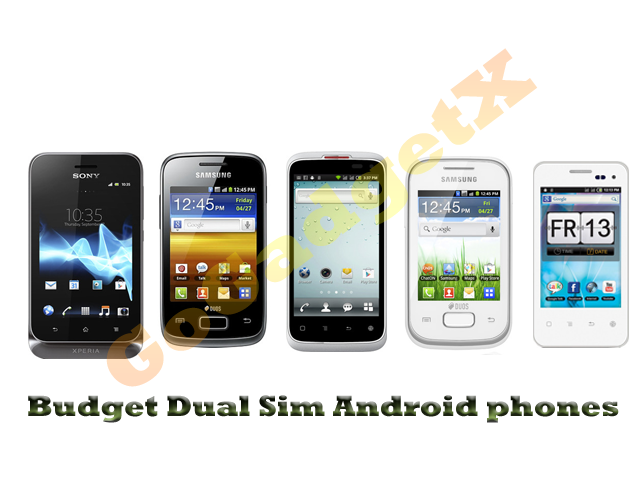 Sony Xperia Tipo Dual: This is the first phone I will recommend to all of my readers who are searching for a dual sim Android phone. You will get 800Mhz processor [Scorpion with Adreno 200 GPU] paired with Android 4.0 IceCream Sandwich OS. The phone is very handy and has a 3.2 inch touch screen. The Music is great and the paired headphones are of great quality. Tipo Dual has a great feel the UI is smooth and Bravia engine with Sony music app gives a great experience. 1500mAh battery provides it a great run time and backup.

Lava Iris 501: This a new Android ICS preloaded Phone with 5 Inch Phablet form. 1Ghz Dual Core processor [PowerVR SGX531] and Dual SIM capabilities are added advantages. Iris 501 has some good reviews online and battery backup is good as well with a 2300 mAh battery. Its better than Canvas 2 and right now there is no phone that can stand against it. Priced well at Rs 8000, I will suggest this phone to people who will love snappy performance packed with big screen.

Huawei Ascend Y300: Huawei is a new player in Android market but really they are old in the telecom equipment field. They have launched Ascend Y300 for people who are looking for a simple single SIM Android Phone with latest 4.1 Jelly Bean OS and good enough 4 inch screen. Cortex A 5 Dual core processor and Emotion user interface gives a fluid performance. The screen is bright and crisp, 1GB RAM and 4 GB storage are good enough. 1730 mAH battery does not provide enough juice but lasts a day long. You would love this Phone. And Ascend Y300 definitely reserves its place in the list of best Android phones below Rs 8000. [Price of Ascend Y300 is Rs 7800]

Samsung Galaxy Young S6312: On our previous version of the list Samsung Galaxy Y was holding strong place. This time the new Galaxy Young S6312 is holding the top place. The Phone has everything ranging from connectivity and Dual sim option. Latest Android Jelly Bean is running on a Cortex A5 processor and 512 MB RAM. Well, 1300 mAh battery do not stand well with 3.2 inch screen and jelly bean. But the phone has a good firmware and stable performance.

Verdict: I would suggest different phones as per the requirements. If you are a moderate gamer, 3G user and want to make video calls go for Huawei Ascend Y300. I have tried playing Dead Trigger, ShadowGun, Blood and glory that works great on Ascend Y300 and they worked flawlessly. If you want good video quality and Music, go for Sony Xperia Tipo Dual. For people who are fan of custom ROMs and modds on Android should go for Galaxy Young as its a samsung Phone so many developers will bring in tweaks for it. Every phone as their own Pros and Cons and thus choose the best for you.

We keep updating about Budget Android Tablets and Phones so you can stay tuned with us by subscribing to our updates.