According to latest research by Google “Only 5% of devices activated daily are Tablets” but I see market filled with 7 inch Android Tablets of all kind and varied price. Right now, There are some big turns going in the Tablet market. Nexus 7 is taking big chunks and thus seems to be taking the title of “Fastest and most selling Tablet” from Kindle Fire. But Amazon is not too far behind they have launched the all new Kindle Fire HD. We recently reviewed Novo 7 Crystal which is another budget priced tablet available in the market. Kobo is another Chinese manufacturer that is launching ICS powered tablets. there are many variants available in the market. Kobo recently launched Kobo Arc to tackle Nexus 7 and Kindle Fire. 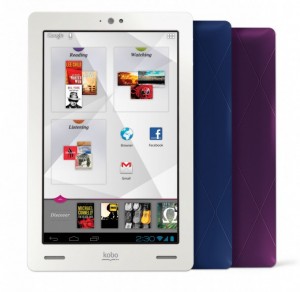 Kobo Arc looks more rivaling to Kindle Fire as there marketing is highlighting on the e-reader function. Kobo has priced the tablet very strategically. The 8Gb version will be available for $149.99 and 16GB for 199.99. Kobo will be selling the tablet through retail partner. They have also launched the e-ink readers Kobo Glo for $129.99 and Kobo Mini for $79.99. This looks an interesting fix where the first company is trying the capture the Amazon e-reader market with so many products.

It seems like Kobo has done a detailed study about the Amazon’s Tablet market and they are fully targeting on them. But there will be lot more tablets affected by these budget priced tablet. There are few more companies set to release Jelly Bean Tablets just before the festive season. We expect the Barnes and Nook, Coby and few more will be in the Jelly Bean budget tablet line ups very soon.