I am other HTC fans were waiting eagerly for new HTC flagship Android device – HTC One. As rumored the phone packs a 1.7 GHz Quad core snapdragon processor with Adreno 320 GPU. It is definitely the best competitor for Samsung Galaxy SIII and Galaxy Note II. Basically, HTC One resembles iPhone 5 but its an Android Phone with Windows 8 like UI. I am very impressed with the first hands on video that I am attaching below: 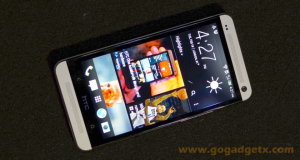 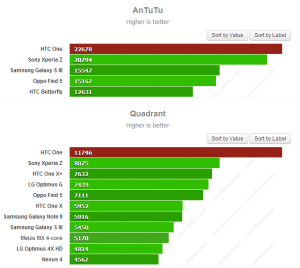 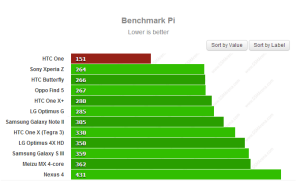 HTC One Specs and features:

HTC One Pros and Cons:

HTC One Hands on Video

I have made pretty clear that HTC One is a great device and tastes new and delicious. We got some benchmark comparison from gsmarena that clearly signifies that HTC One is way ahead of Xperia Z or Galaxy SIII when it comes to performance or multitasking. For me the Aluminium finish of the phone is eye catching on the first look, it has curvy edges and a smooth feel. The speakers are loud and beats audio is awesome. The main USP of the device is HTC Image chip 2 or the ultra pixel camera that claims to take 1080P full HD videos at 60 fps. The F/2.0 Ultrapixel sensor equipped camera make it attractive, but still Sony Xperia Z is the best Camera phone yet. HTC has done a totally new UI HTC sensational 5 for this phone and efforts seem to work right. The new UI has lots of improvements and tweaks to make things easy and fast. Two new things are Blinkfeed and Zoe – blinkfeed is a simple news and social media update showing widget on homescreen. Zoe is a camera app that takes short clips and combines it to make a whole story. You can check both apps videos below:

Stay tuned with us as will update you about the price and availablity of HTC One very soon. We will be also bringing up a tutorial on HTC One Root and install custom recovery.

How to Relock, Unroot and Unbrick HTC Butterfly [Tutorial]

HTC Butterfly is a Quad core processor powered Jelly Bean Android Phablet. It is much to talk due to its...