Samsung Exhibit 4G SGH-T679 is an LTE enabled Android phone available on T-Mobile. This phone is a cool option who are seeking a simple smart device to carry with high speed internet and multitasking capabilities. Samsung has equipped Exhibit with a single core 1Ghz scorpion processor and Adreno GPU. If you need to get more  power out of your device than its better to choose and install some light optimized ROM that has good performance and better battery backup. We searched a lot over the internet and selected the ROM which have received the maximum number of positive responses. Some of these are latest Android 4.1 Jelly Bean based and some are based on stock firmware.

CyanogenMod 11 Android 4.4 Kit Kat Unofficial: Exibit 4G users must be waiting to taste Android Kit Kat on their device. It’s very clear that no official KIt Kat firmware will be released for Exhibit so you will need a custom ROM. A xda forum member has compiled a CyanogenMod 11 firmware for Exhibit 4G. There are some issues with Stock browser, Video camera, MTP. There may be some more issues but still you can enjoy calling and other basic features with  a Kit Kat user interface. [I have suggested this for a trial – This is not a stable firmware now]

PacMan Android 4.2.2 Bed ROM for Galaxy Exhibit 4G: Paranoid ROM, AOKP and CyanogenMod goodness mixed into one. Pac Man ROM well knows for their exquisite control and features. Well, this ROM is new so there may be some issues. But people are reporting that its smooth and lag free. Most of the hardware is working, but still developer has requested to report any bugs so that the ROM can be improved. The process is very simple, just down the ROM and gapps >> Load it on the SD card and clean flash it with the recovery you have. Developers have recommended TWRP but CWM works fine as well. The developer has also suggested to disable the changing of gravity of Pie control. Just go to settings>>system>>Pie settings>>trigger area>none. 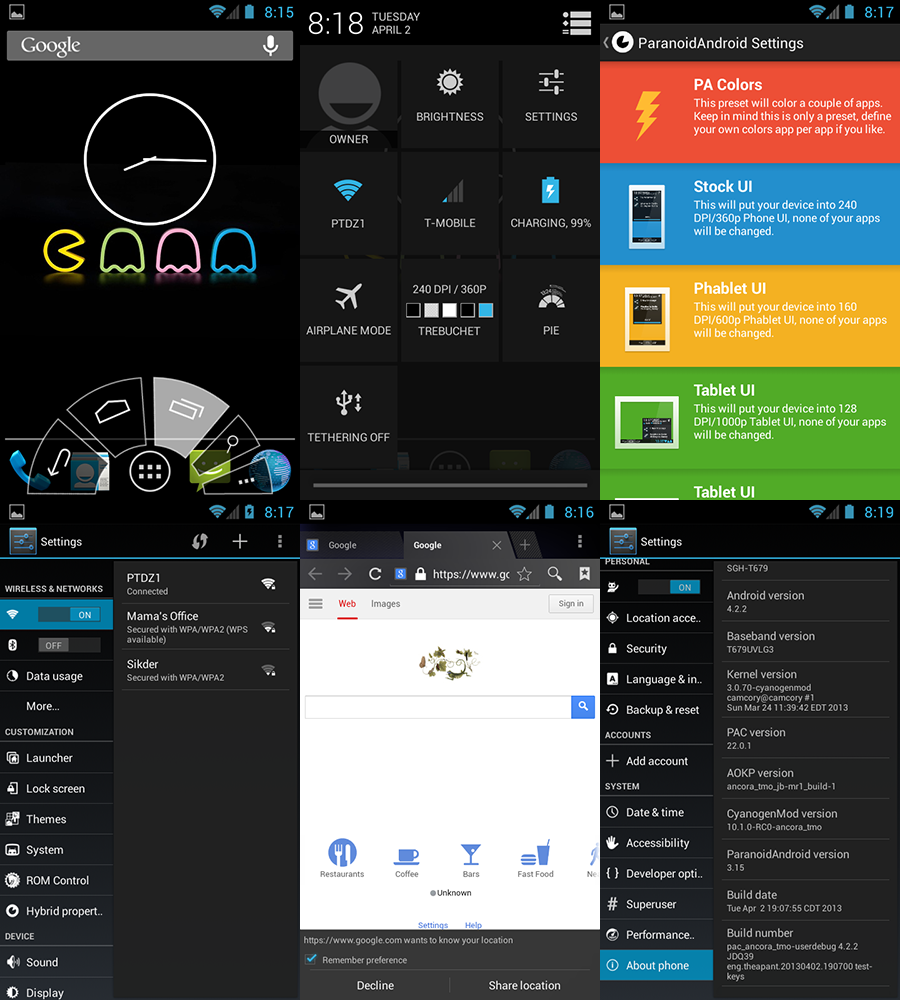 AOSP Alpha Build 6 ROM for Galaxy Exhibit 4G T679: AOSP or Android Open Source Project is a Google initiative to build Android ROM’s using the source. These ROM’s totally differ from that of stock ROM’s that are available for specific devices, both in terms of looks and performance. OEM’s add their proprietary stuff to a ROM which affects the performance and speed. Keeping this in mind developers base their ROM directly on the stock Android firmware. AOSP ROM’s are customized stock ROM and can be called as a better option for an Android device when it comes to comparison with OEM’s. The present ROM is based on Android 4.1.2 Jelly Bean. There are no bugs and issues in the ROM and therefore could be called as a stable ROM. The HD Recording and APN features are presently unruly which are expected to be resolved very soon. If you want to know more about the ROM and if you want to download it, just go to the link provided below:

Slimbean 3.1.1 Unofficial ROM for Galaxy Exhibit 4G T679: Slimbean ROM packs in features of CyanogenMod, CAN and AOKP. It came into action with the introduction of Android 4.1 Jelly Bean. As its name, it is slim and there are no useless stuffs in it. The ROM Features Advanced Slim Settings that are based on CAN Settings layout and that can be viewed under System Settings of your device. ASS offers high end modifications and custom features such as Interface, Performance, Theme Engine support and Device Settings modifications. The ROM also delivers Stability, appreciable battery life and performance. As the device is not supported by the Team, an unofficial but a stable port is provided by Camcory to the users. To get other details on the ROM and to try it, visit the link provided below:

Linaro CM10 ROM for Galaxy Exhibit 4G T679: CyanogenMod needs no introduction, it is a very popular custom ROM. It came into existence when Android made its debut. The ROM is famous for extended and unmatched features. The ROM is available for many of Android devices that are available presently. It is considered as one of the stable custom ROM for an Android device. The ROM is not only stable and has enumerable features but also unmatched quality apps like Theme Engine, DSP Manager, Apollo Music Player and other cool stuffs. The present ROM for Exhibit 4G is will deliver better performance on it. To get to know details about the ROM and to download it, visit the link provided below:

ParanoidAndroid ROM for Galaxy Exhibit 4G T679: The ROM holds the credit for firstly coming up with true Hybrid Mode that provides users with a completely different UI. The ROM enables its users to choose between several UI modes that include Tablet, Stock, Phablet and Hybrid modes. A new set of features offered by the ROM are ability for users to modify the Per-App size and colors regardless its app or a user installed app. The ROM also delivers great battery life and performance support. The credit of developing this ROM for the Exhibit goes to XDA Developers member Camcory. To know more about the ROM and to download it, visit the link provided below:

You are free to choose any of the ROM’s mentioned in the article or you can try all the ROM’s one-by-one. Just keep in mind, you should create a Nandroid backup of your current ROM so that you can revert the same whenever you want. Do let us know if you have any queries, we are keen to help you always in resolving any kind of problems you face.