Nexus 6, the successor of the extremely successful Nexus 5, was launched recently on October 29, 2014. It ships with Android 5.0 Lollipop, the latest OS version. With a 2.7 GHz quad core processor and 3GB of RAM, the specifications are capable of putting any other high end smartphone to shame. As like other Nexus series device this phone features AOSP firmware that is slim and minimal for fast performance. You will fall in love with the enhanced fluidity and simplicity of Android 5.0 Lollipop. The Camera is awesome as well, it can click both full HD photos and Videos.

You have a device which features the hardware that is yet to come to any other manufacturer. You are getting all premium hardware with Google’s services. Once you unlock your device and install recovery you will be available to overclock your device or install a kernel that will be better and blazing fast. We are providing below a detailed guide to unlock bootloader, install TWRP recovery and root Nexus 6 easily.

Tip: You must try Xposed framework to customize your device without installing custom rom 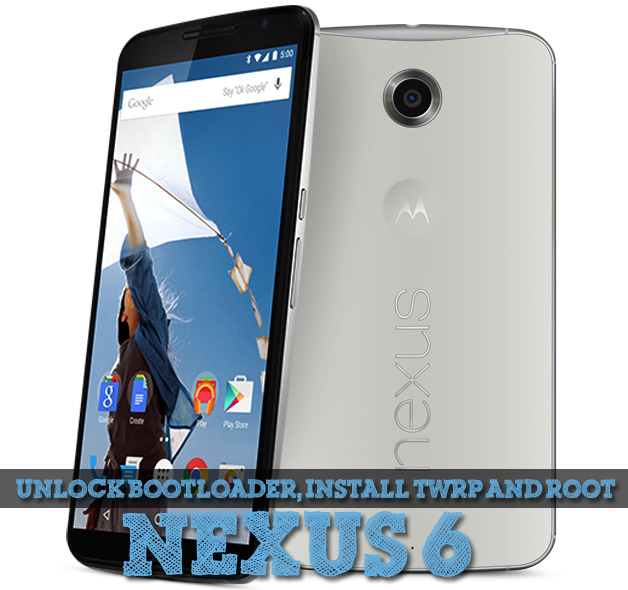 How to Unlock Nexus 6 Bootloader

Nexus 6 comes with a locked bootloader, to root or install recovery you will need to unlock this device. Here, we are providing a detailed tutorial to unlock bootloader of Nexus 6.

Before we start, you need to go through a few preliminary steps:

So, now that everything is ready, let the fun begin!

Note: For Mac users, you need to put a “./” before the commands(without the quote) for the commands to work.

Rooting this phone is actually extremely easy, and the entire credit goes to developer Chainfire, who has created an awesome tool called CF Auto Root. This tool can easily root your Nexus 6 with just one click! You can download the tool here.  So before starting, you need a few tools ready which you will need during the process.

How to root Nexus 6:

So now that the Bootloader is unlocked, you can install custom ROMs like Cyanogen MOD, Paranoid Android, MIUI etc. But before that, you need to install a custom recovery like TWRP recovery to help you make backups of system files and restore them, if needed.

You  will need to download the recovery image file from this website- Nexus 6 recovery image. It’s a small package, about 12 MB in size. Remember that this is only for Nexus 6, and must never be used on any other Android device or else your device might be bricked.

The following steps will assist you in installing the recovery software.

Hope you have understood the entire process. Just as I said, once you do these stuff a couple of times, these will seem really easy. Hope you have your unlocked and rooted Nexus 6 soon!

Try the best icon packs on your Nexus 6.