It’s almost the end of the year, which means it’s time to evaluate what 2021 has given us. For example, the tech market was overperforming this year, giving us one great product after another. This year, both Apple and Android-based phones have come in a great variety and high quality. However, some products were selling better than others, and it’s important to learn what those products are.

The top sales demonstrate what people want and expect in a good smartphone. The current standards for smartphones are pretty high as the consumers are spoiled with great options. So, these days, users want quality and durability. Thus, a phone should last you at least several years. People also expect good cameras (front and back), long battery life, and good screen quality. Let’s see what smartphones delivered all those qualities and earned our love and a place in the top five. So, here are the top best-selling smartphones in 2021. 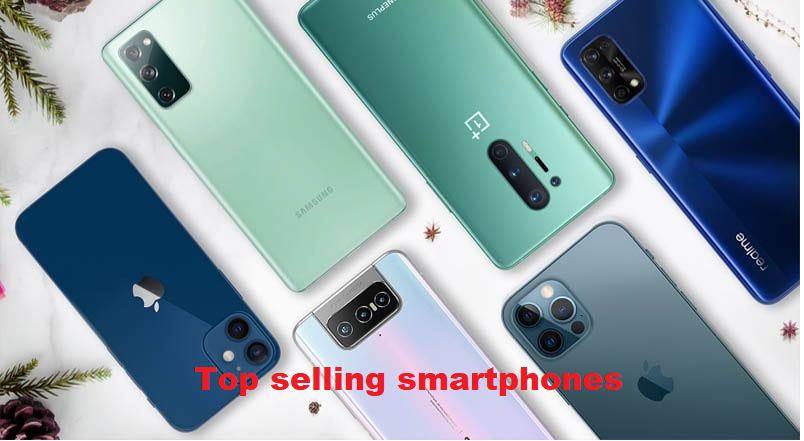 Apple introduced its new model, the iPhone 12, at the end of the year 2020. Unsurprisingly, it has become an instant hit and dominated smartphone sales during the entire first quarter of the year. Months before the phone hit the market, the pre-sales were skyrocketing. Although most new Apple phones enjoy such high attention and a loyal fanbase, iPhone 12 seems to really deserve to be at the top of our list. The new version came out rather powerful, with new camera technologies, and great battery life. It was everything people were waiting for and even more. So, even with the newer Apple model on the market, released this year, iPhone 12 is still the most sold smartphone of the year.

As usual, Apple offered a slightly improved and more powerful version of the original model, in this case, the iPhone 12, a few months after the first release. The iPhone 12 Pro and the iPhone Pro Max are, in fact, rather similar, and so they are quite close in sales, too. However, the price of the iPhone 12 Pro Max turned it into a weaker competitor to other best-selling smartphones on the market today. The newer model has surely much to offer. This smartphone remains the second best-seller among Apple products this year, beating even the iPhone 13. However, the latter is still too expensive for the majority of users, hence lower sales.

Yet, at this price range, it can’t compete with Android products on the market, offering great features at a lower cost. You can even order research to learn more about the main current difference between Apple and Android products. Are you looking for the best essay writing service? Well, then what are you waiting for? Go and see the reviews on the most popular writing services today.

The Chinese manufacturer, Xiaomi, continues to dominate the tech market. Their smartphones have gained a foothold in the competition that they have held for over five years by now. The new model, the Xiaomi Redmi 9A, is the number two best seller in the smartphone market of 2021. First of all, Xiaomi is a popular choice due to its price-quality ratio. Operating on Android 10, the phone can provide strong performance, relatively long screen time, and powerful cameras. It’s also known for its minimalistic and pleasant design and great screen qualities for its price.

Of course, it has its downfalls, like being quite heavy and large for smaller hands. Its memory could have been better and the recent Android updates on Xiaomi are somewhat confusing. Yet, it offers everything one needs from a smartphone for everyday use and comes at great prices. Thus, this budget smartphone is the top two best sellers in 2021.

Samsung Galaxy smartphones have been among the top-selling smartphones for quite a while now. Their recent addition, the Samsung Galaxy A12, is no exception. Released at the beginning of the year, this model has soon become the number one choice among Android users. Those who want good quality, reliable and durable smartphones that are not Apple usually go for a Samsung.

Samsung Galaxy A12 is a budget option compared to more recent Galaxy models, like Galaxy S22, for example. Yet, even at the entry-level, it doesn’t fall back on any major features, like excellent screen qualities or long battery life. It has also been praised for its good design and great camera updates. On the downfall, it is known for having a not-so-fast processor. Still, throughout 2021, Galaxy A12 remained in the top smartphone sales of the year.

Lastly, Samsung Galaxy A21s closes the top five best-selling smartphones of the year. This new Samsung model has everything a modern consumer wants to see in a smartphone. It’s well-designed, has a powerful processor, good cameras, and durable batteries. All of that comes with top-notch screen quality and impressive storage. Although the smartphone was released only mid-summer 2021, it has soon caught up with the rest of the best-selling models of the year. Of course, it is not the most budget option on the list, yet, it is still on the affordable end.