We have already reviewed few Android 4.1 Jelly Bean Tablets and now there is a new arrival on the rack. Acer has few successful tablets in its Iconia series and now they are coming up with a new Tablet that is Tegra 3 powered and running latest Jelly Bean firmware. Iconia A110 is the new avatar of Acer Tab range equipped with the latest Nvidia Tegra 3 Quad core processor and Nvidia GeForce graphics. Other features tell about 1GB RAM and 8GB onboard storage that is expandable through MicroSD or MicroSDHC card. Screen is a 7inch 1024X600 pixel resolution capacitive touch screen. Check out the detailed specs and features below: 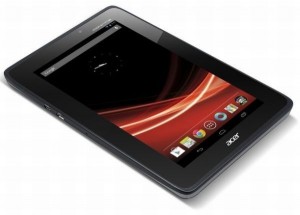 I believe that Acer Iconia Tab A110 has Jelly Bean Paired with GSM connectivity. Capability to make calls and SMS make it different from Nexus 7 and Kindle Fire HD league. Right now, The most Comparable device here Note 10.1 or better Galaxy Tab 2 [Jelly Bean update awaited]. For sure Iconia A110 has its advantages but it’s too early to express my final thoughts. I will wait for a hands on review.

Gogadgetx is a technology blog where we focus on making your Gadgets more awesome and useful. We regularly publish detailed tutorials on iPhone, iOS, Android, Windows and the web.

For Advertisement or any other inquiries you can contact us.

Android Smartphone is getting common and it looks like companies in India are eager to churn out the best in...

Most of us expected that after Hurricane Sandy raging on the Eastern Seaboard, The Google launch event will be postponed....